G20 has, over the last 20 years of its existence, evolved into an effective international forum for economic cooperation that not only attempts at addressing issues pertaining to financial sustainability but also often matters related to social development. It brings together leaders and representatives from every continent as well as governors of central banks, to collectively address the most significant challenges and propose impactful solutions for the whole world.

For the last decade, this forum has played an instrumental role in addressing the global financial crisis, putting forward reforms fostering growth and development, and shaping collective approaches on issues requiring international cooperation.

International Cooperative Alliance has been participating in the G20 Engagement Groups since 2014, having representatives in the taskforces and contributing actively to the discussions and preparation of documents. 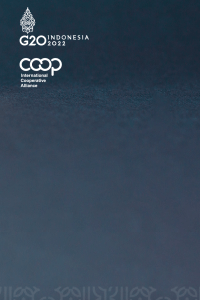 What will you do today to build a better world? It starts at the G20.
Read our flyer!

Who are the G20 members?

The G20 membership comprises a mix of the world’s largest advanced and emerging economies, representing about two-thirds of the world’s population, 85% of global gross domestic product, 80% of global investment and over 75% of global trade. The G20 is made up of 19 countries and the European Union along with representatives of the International Monetary Fund and the World Bank.

What are the G20 Engagement Groups?

The G20 Engagement Groups are independent collectives that are led by organizations from the host country. They represent civil society and work with other organizations from G20 countries to develop policy recommendations formally submitted to G20 leaders for consideration. Engagement Groups include the Business 20 (B20), Civil 20 (C20), Youth 20, Labour 20, Think 20, Women 20, Science 20, and Urban 20. Cooperatives have mainly engaged in B20 and C20.

To enhance the participation and recognition of cooperatives' contribution to sustainable development by the world's largest economies, the ICA Global Board approved having a cooperative working group for ICA Members to engage in the G20 Engagements Groups, particularly the B20 and C20.

The Cooperative Working Group's main objective is to bring the cooperative movement's voices to the G20 Engagement Groups through their contribution in drafting policy papers, background materials, and advocacy documents to show their involvement and contribution in resolving issues addressed by the G20 Summit. It will also establish and strengthen partnerships between the international cooperative movement and other G20 countries' stakeholders.

Cooperators from around the world gathered online on 26 May 2022, organised by ICA’s member in Indonesia, the INKUR Federation, the event highlighted the role of cooperatives in areas of wealth distribution, poverty and citizen’s education.

C20 Summit event “The Cooperative Model as an Expression of Civil Society for an Inclusive and Sustainable Recovery”.

Representatives of the cooperative movement took part in the C20 Summit on 5 October. The ICA together with the Italian Cooperative Alliance organised the side event entitled “The Cooperative Model as an Expression of Civil Society for an Inclusive and Sustainable Recovery”.