The ICA’s General Assembly in Seville heard from Illia Gorokhovskyi, the Chair of Coop Ukraine, who called on cooperators in attendance to continue to support his country’s war torn cooperatives.

Mr Gorokhovskyi began by saying that many Ukrainian cooperators had intended to attend the ICA’s General Assembly in person but had to change their plans due to the ongoing war.

“Their intention was to have been, to talk to you; to share emotions and to swap experiences.

“Because in simple terms, every Ukrainian had plans, dreams and confidence in the future, but then came the shock of what occurred on February the twenty fourth of this year.

“Everything that has happened since that date is nothing short of a terrible tragedy for my country as a whole and for each and every Ukrainian, individually,” he said.

He talked about the war’s impact on his country and its citizens - more than 10 million Ukrainians have become internally displaced while 30% of the infrastructure has been destroyed. The Ukrainian government estimates the cost of the war to its economy to be in excess of US$600bn.

“At present, it is not even possible to accurately estimate the extent of the damage caused by the war to Ukraine’s cooperative sector.

“This is because, it is not over yet, and also because, some of the damaged and destroyed properties and locations are in both the war zone and in the temporarily occupied territory where they are presently no longer accessible. Today, according to the most modest estimates, the loss of cooperative enterprises exceeds 80 million US dollars,” he said.

He added that despite such challenges, Ukrainian cooperatives continue to work selflessly to provide cooperative members and consumers with essential and necessary goods and services.

“We are already developing ambitious plans to restore and rebuild the cooperative sector in the post-war period. We firmly believe that after the war, because all wars end sooner or later, Ukrainian cooperation will not only be restored but also become more powerful and better developed, and will take its worthy place in the real sector of our state’s economy,” he said.

He thanked the management and staff of the offices of the International Cooperative Alliance, the European Cooperatives, Consumer Cooperatives Worldwide (CCW) and Euro COOP, “for their valued support and rapid assistance” as well as cooperative organisations and private philanthropists as received from the United States, Australia, Great Britain, France, Ireland, Poland, Germany, Bulgaria, Malaysia, South Korea, and the Philippines for their targeted financial assistance to Coop Ukraine.

“You should know that all the assistance that COOP Ukraine has received and will continue to receive in the future, from the international cooperative community will go towards rebuilding damaged and war-torn cooperatives and supporting war-affected cooperatives and the cooperative sector as a whole,” he said.

“It is an opportunity to prove that the fundamental principles of cooperation are mutual assistance and solidarity! These are not just beautiful slogans borrowed from the past for today they convey a deeper meaning and message. They are reminders to you and the world at large that the cooperative idea both lives and wins.

“I believe in God, in Peace and I believe in Justice. I love my country and ask that you stand with me united in true Cooperation,” he said.

Information on how to donate to Coop Ukraine is available here https://www.ica.coop/en/newsroom/news/appeal-donations-ukraine 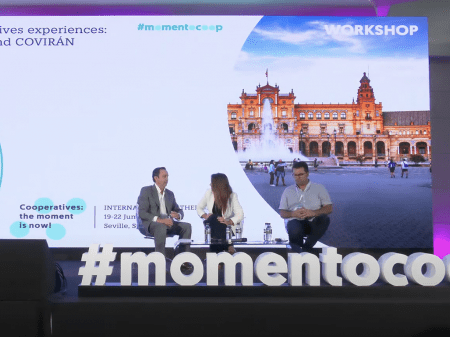