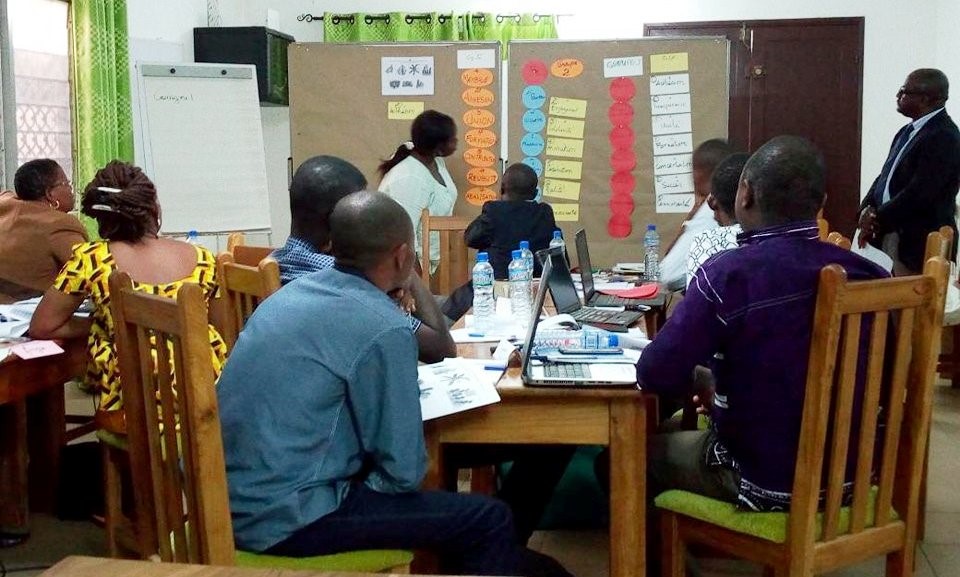 APES-Togo - an associative agency that promotes cooperative entrepreneurship carried out trainings on the creation and management of cooperatives with the support from the German Cooperation GIZ a program that helps in youth empowerment and cooperative entrepreneurship component.
The event took place in two phases that saw phase one in defining the pedagogical objectives, preparing of the content of the training, choosing of teaching methods and definition of the animation tools that was in mid January. The second phase took place from 22nd to 26th January with the training on creation and management of cooperative enterprises in accordance with OHADA Uniform Act on the Rights of Co-operative Societies, its advantages and the stages and conditions of creating a cooperative society.
APES-Togo aims to improve the economy and social development of Togo through cooperative model as a way to achieve the UN Sustainable Development Goals for 20130. By promoting the development of cooperatives in accordance with the principles and values of the ICA, APES-Togo hopes that it will draw to the attention of cooperative youth entrepreneurship programs in the country. This can also give birth to partnerships with the Togolese government and the Italian organisation for international cooperation together with Coopermondo.

Swaziland has been among the slow growing economies on the continent. This is mainly due to the shortage of entrepreneurial skills in the youth. The lack of such skills has also lowered the effectiveness of potential young entrepreneurs and the rate of youth start-ups (Zuzan Brixiova, 2009). At present, a civil service occupation and career is the central drive for Swazi youth whereas the structures providing these opportunities are insufficient. Junior Achievement Swaziland (JAS) equip youth with needed financial literacy, work readiness and entrepreneurship skills, enabling the youth to contribute and succeed in the local and global economy.
The recent partnership between Swaziland National Youth Cooperatives Alliance (SNYCA) and JA Swaziland will see a continuous strive to transforming lives of young people in business, finances and also in offering job shadowing opportunities. JA launched saving Cooperatives in schools on January 15 with the aim to groom a generation of young people who will be able to manage their finances hence through the financial literacy program. A lot of financial practical concepts will be introduced including the aspect of saving in cooperatives.  SNYCA reported that so far about 80 teachers received training in preparation for implementation of the Financial Literacy program in schools.

The Minister of Commerce, Industry and Trade Mr. Jabulani Mabuza officially launched BOLESWA Tripartite Youth Cooperative Exchange Forum, which took place at Mavuso Trade Centre in Swaziland from the 4th to 8th December 2017.
The Exchange Forum is attended by the youth from Botswana, Lesotho and Swaziland hence the name BOLESWA Tripartite. This Tripartite Youth Cooperative Exchange Programme came about after youth from the three countries crafted a forum where young people could get together to share ideas on how best they can contribute to the development of their countries’ economies. The Forum has so far encouraged participation of young people who engage fully, make new connections and learn from each other while sharing valuable ideas. This is also a factor that has been led by cooperatives which are highly recognized worldwide more so because of their potential to unite people and the observed continuous contribution in improvements to people’s livelihoods.
In his statement, Mr. Mabuza stated that globally young people are a powerful force for change. The world is at a crucial point in history where social, political, economic and environmental issues have compelled young people to take a stand and do their part in bringing about meaningful change in the world. The Minister pointed out that the voice and influence of youth in changing the economies of their countries should not go unnoticed. He added that the Forum was also designed to promote self directed business initiatives where the owners of businesses decide on their own what to do to increase production. It opens doors for marketing of the three countries products and can see a future engagement of self help projects.
Currently, Swaziland has a record of 26 registered youth cooperatives society and the government is encouraging the societies to factor in the production of goods and services that would tap into regional and international markets. They also launched an umbrella body for youth cooperative in the country known as Swaziland National Youth Cooperative Alliance (SNYCA) which is an apex organization mandated by the Ministry of Commerce, Industry and Trade to coordinate all youth cooperatives activities in the country.