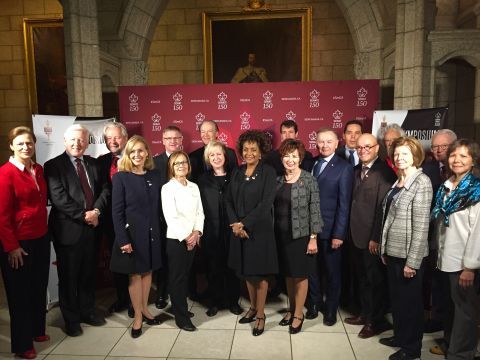 For the 150th anniversary of the Canadian Confederation, the Senate organized a symposium in order to deepen the reflection about the future of the country. The speakers were asked to give their thoughts on different important issues in our society: the Relationships with Aboriginal People, Canada’s International Identity, the Francophonie, the Enactment of the Charter of Rights an Freedoms, National Unity, Gender Equality, Sustainable Development, Science and Culture, the Invention of a New Economy, as well as the Senate’s Participation in Canada’s Evolution.

Monique F. Leroux, President of the International Co-operative Alliance and Founder of the International Summit of Co-operatives, was invited to address the Upper Chamber upon the theme of Gender Equality: A Reachable, Important Objective. This very important issue has naturally brought Ms Leroux to talk about inclusive leadership. Ms Leroux is especially interested in the progress we have made, on the distance we have yet to cover, and on our influence in the world.

Download Ms Monique F. Leroux's notes of speech on the occasion of the Senate Symposium for the 150th Anniversary of Canada's Confederation Senate of Canada.