ICETT looks at the cooperative effort to halt child labour

The event featured presentations from cooperators and UN representatives, who explored the sector’s role in tackling child labour. ICA Director General, Bruno Roelants, provided an overview of existing ILO standards regarding child labour, including Recommendation 193 on the Promotion of Cooperatives, which mentions child labour twice and was embraced by the ICA. He added that the Seventh Cooperative Principle made it clear that cooperatives should act against child labour and that principle five regarding education also made cooperatives more likely to help educate children. 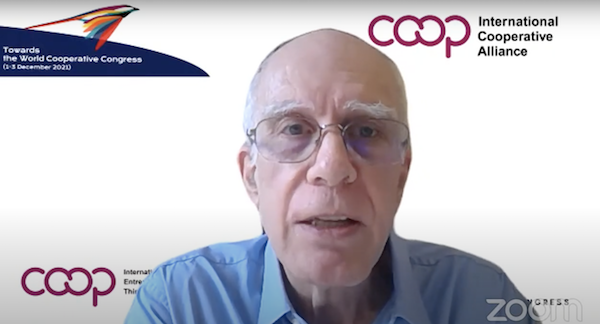 According to the ILO, around 160 million children are engaged in child labour globally, 75% of them in agriculture. 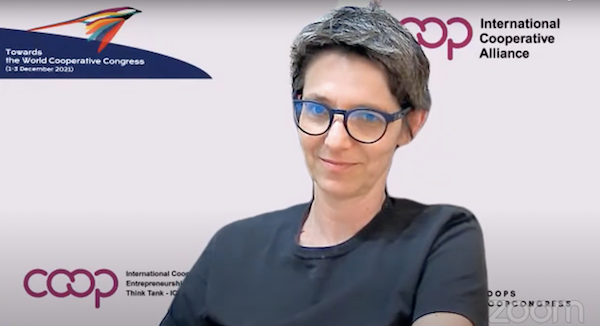 “When a company uses child labour today to make profit, it is not thinking about the future,” said Merav Niv, Legal Counselor for the Kibbutz Movement. Cooperatives play a role in addressing this by improving members’ livelihoods and those of communities they serve as well as by disseminating good practices and doing advocacy work.

Patrick Owusu shared best practices from Asunafo Cocoa farmers’ cooperative in Ghana, which is working with international partners to tackle child labour. Measures include establishing and training a Community Child Protection Committee across 67 communities, raising awareness via local community radio and establishing a children’s parliament to enable children to discuss issues that affect them. 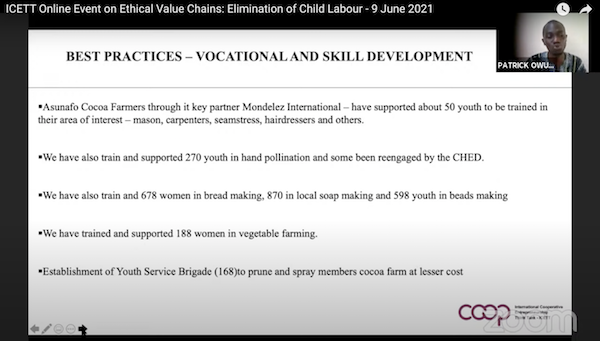 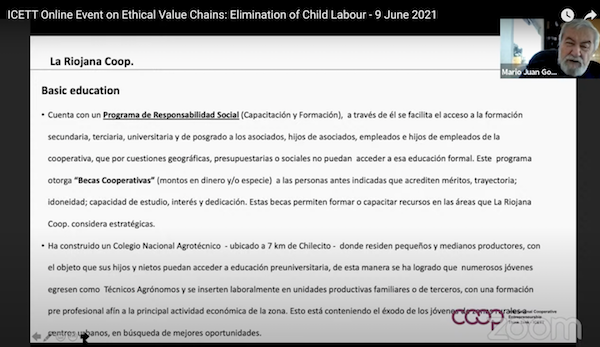 Mario Juan Gonzalez, president of the La Riojana Coop in Argentina, said his cooperative's work to stop child labour was strengthened by gaining Fairtrade certification in 2006. La Riojna developed a social responsibility programme to give access to secondary and tertiary education, as well as university and postgraduate courses, to members, children of members and children of employees. The cooperative also provides scholarships and has built a National Agrotechnical College so that children of members and employees can receive pre-university education. 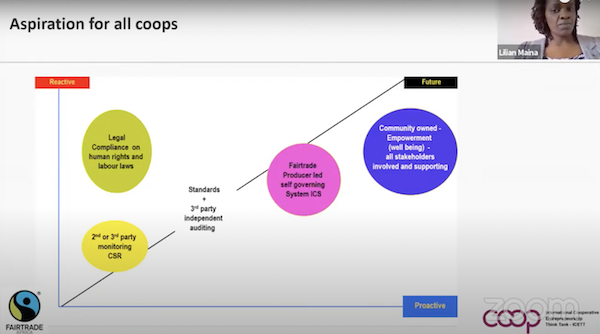 Lilian Maina from Fairtrade Africa further described how Fairtrade standards contribute to the elimination of child labour. Fairtrade’s Small Producer Organisation Standard Requirements stipulates that no children under 15 years or under the minimum age defined by local law can be employed. The standards also mention that no dangerous or exploitative work of those under 18 years of age which might affect their schooling, health and safety, can take place.

Fairtrade runs a number of projects with cooperatives to eliminate child labour including the Dignity for All project in Ghana, through which it promotes the rights of children in cocoa growing areas by collaborating with teachers. Another project, RECOVER Africa brings together partners in six countries which implement a Youth Inclusive Community Based Monitoring and Remediation system. Developed in 2012 by Fairtrade International, the methodology requires young people to be part of the monitoring and responses to child labour identification and remediation. Asunafo Cocoa farmers’ cooperative is one of the cooperatives involved in these projects. 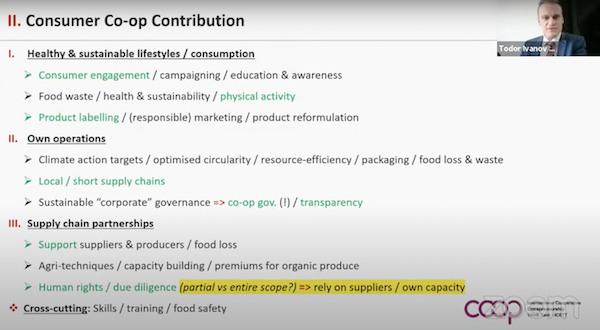 Todor Ivanov, Secretary General of Euro Coop, a sectoral organisation of the ICA, presented a European Commission initiative to develop a code of conduct for responsible business and marketing practices. Euro Coop is working closely with the Commission on the Code and has been invited to highlight the sector’s experience in this area.

While the code will not be legally binding, the commission may consider legislative measures if progress is deemed insufficient. Euro Coop will promote the code among members, facilitate cooperative engagement and be involved in the code’s future review.

“Commitments beyond legislation have become standard practice for co-ops,” said Mr Ivanov. For example, Coop Italy conducted 13,000 on-site inspections on fruit and veg farms to tackle gang mastering. In the UK the Co-op Group supports victims of modern slavery in starting building a new life via the Bright Futures programme.

“Consumer co-ops have a role in continuing collaboration and driving the agenda for ethical supply chains,” said Mr Ivanov. 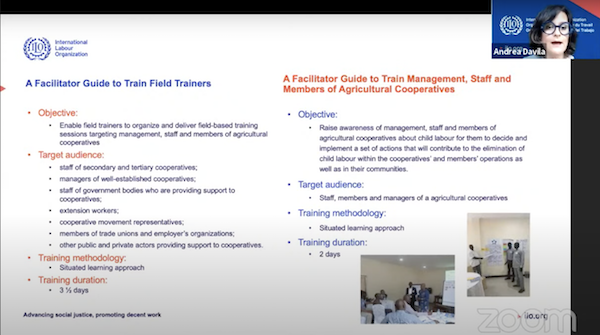 The new training aims to help participants identify child labour and devise practical actions they can take in their organisations. It includes a guide for field trainers and another for the management, staff and members of agricultural co-operatives. The guides are available on the ILO’s website.

Another ILO project aimed on child labour is ACCEL Africa. ILO Technical Officer Edgar Aguilar presented the project, which covers six countries and five supply chains and seeks to influence existing legislative frameworks and test evidence based solutions. Interventions target specific geographical locations with the aim of addressing all forms of child labour. As part of this, the ILO is also helping cooperative organisations set up Child Labour Monitoring Systems and review their capacity building programmmes to see whether child labour issues were integrated into these.

“The ILO is fully committed to working with the cooperative movement to end child labour. We expect that apex organisations can mainstream and upscale the work we do writing those projects to be much more institutionalised,” said Philippe Vanhuynegem, Chief of the ILO’s the Fundamental Principles and Rights at Work (FUNDAMENTALS) Branch. 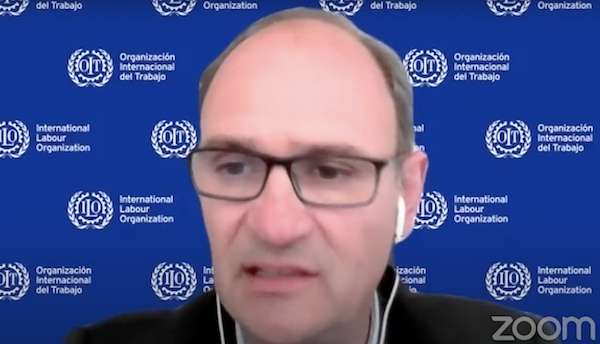 He said the ILO aimed to work more closely with the cooperative movement on the prevention and elimination of child labour and invited the movement to join Alliance 8.7, a campaign to promote Target 8.7 of the 2030 Sustainable Development Goals to end modern slavery, trafficking, and child labour.

In his concluding remarks, ICETT Chair Tarun Bhargava said the group would disseminate the presentations among the ICA members and beyond and the conversation would continue at the World Cooperative Congress. 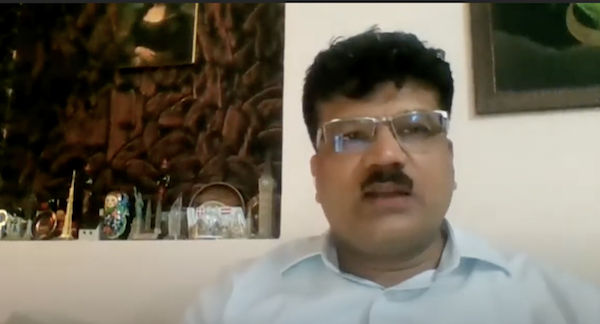 The event was the third organised by ICETT in June to discuss global issues of concern for cooperatives. Watch the full recording here.