The role of the Italian Cooperative Movement in handling massive migration: the social cooperative Auxilium experience

Massive migration is a salient feature of our times. Entire populations are striving to escape war and persecution, inhuman living conditions and a hopeless future; they undertake exhausting journeys either by the sea, towards Italian or Greek shores, or by land, through the Balkans.

A single number suffices to confirm that migration has reached an unprecedented and ever more worrying level. That number is 5.022. It is the number of people who in 2016  died at sea while trying to reach Europe.

A sad record indeed, which nobody can ignore and which is – or should be – a matter of concern not only for those countries that, due to their geographical position, are called to take charge of the humanitarian burden, with clear and increasing difficulty.

During 2015, 5% of the applicants were granted asylum, 14% subsidiary protection, 22% humanitarian protection, but an impressive 58% were denied any protection.

In the light of so complex and heterogenous a picture, we – everyone of us – should ask ourselves what kind of answer can we give, building on the foundations of article 17, section 2, of the European Directive number 33, of 2013, which asks Member States to “ensure that material reception conditions provide an adequate standard of living for applicants, which guarantees their subsistence and protects their physical and mental health”. A truly difficult challenge, which can only be tackled and won by working at the standards and quality of reception procedures and infrastructures.

Unfortunately, no help may come from the substantial deadlock at the European level, which follows the dramatic failure of the so-called “relocation” strategy, which aimed at sharing the migrants among the various European countries, but which to this day has been implemented for no more than 3% of what was planned. No surprise then that Member States are acting on their own, without no common policy and no effective coordination. Even less surprising that difficulties and drawbacks are increasingly manifest and severe.

The percentage of youth migration is impressive: according to official data of Eurostat, in 2015 more than 81% of the applicants were granted asylum are between 18 to 34 years old (73,5% men and 7,5% women) .

These cooperatives follow different reception models, either scattered throughout the territory or concentrated in the fore-mentioned centers; still, ours is always a reception which promotes, supports and implements the founding principles of Cooperation; a reception that takes care of the individual and her needs; which is capable of providing a new lease on life and an opportunity of integration to those who, without any fault, have found themselves deprived of both.

A great example of that, identified as a “best practice” by the Italian Interior Ministry, is the model of the social cooperative Auxilium, which many insiders already had the opportunity to know through a short video presentation last October, during the final day of the International Cooperative Summit in Quebec City. 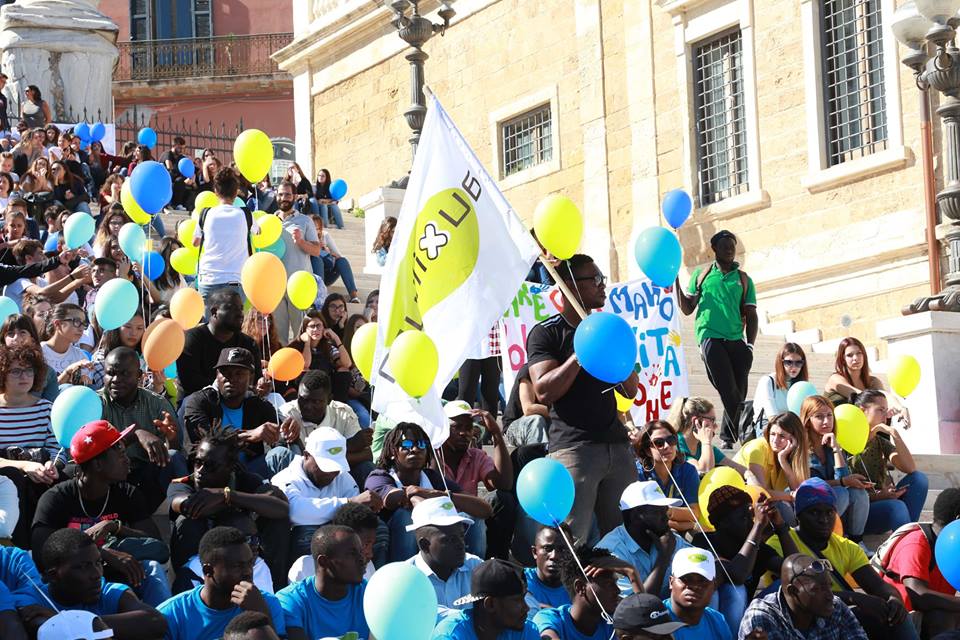 The latter two are among Italy’s top centers in terms of available accommodations and number of receptions; yet, they still stand out as privileged, high-quality centers, where cooperators steadily work at the integration among different cultures, by paying special attention to the teaching of Italian, by promoting socializing events among the guests (including the organization of recreational activities, like football or basketball, or theater workshops), and by favoring a continuous interaction with the local communities, under the firm belief that what happens during the early phases of reception is the most important basis for building a refugee’s future opportunities of social integration.

In this vein, the invaluable message that comes from the daily work of Auxilium cooperators is that cultural and religious diversity is a resource, rather than a burden.

The Youth Aggregation Center (C.A.G.) The Relay operates in the historic center of Genoa from 1987 and it is headquartered in Prè in Vico delle Marinelle 6R. It offers opportunities to socialize and meeting organized for children and teenagers, It operates according to the relational systemic approach in favor of children and their families, It promotes social cohesion and the "well-being" in the territory through the networking and community development. The access of minors to the aggregation center is both spontaneous, with the inscription by the parent or those who are responsible, both for sending agreed with the Area of ​​Social (ATS) competence. The Relay relies on the contributions of professionals and volunteers.

House of the Young

Located in Piazza S. Sabina 4 (in Piazza della Nunziata) House of Young is named the host activities, listening, material and moral support to the female youth, held for decades by ACISJF (look down). After several years of inactivity, Today the House, restored and modernized, He continues to fulfill this mandate, always done by ACISJF, It has broadened its social tendency also to service for weakened families and severely marginalized (homeless persons and foreign asylum seekers and refugees). These new services - canteen, community and social housing – They are promoted by Caritas and managed by the Auxilium Foundation, in collaboration with the social cooperative Il Melograno and Emmaus Genoa and the volunteer organization Volunteers for Auxilium. Plays here his canteen also the Community of Sant'Egidio.

The International Catholic Association of Young Service (A.C.I.S.J.F. Protection of Young) born in 1897 Fribourg (CH) and in 1902 in Italy: a year later it is already present in Genoa. The original inspiration is to flesh out the "social Christianity", realize that the attention of Christians to social issues. In Genoa, its activity is mainly characterized by the management of the House of Young, open in the 1958: per 30 years ACISJF responds with this welcome to the delicate problem of emigration of women in a seaside cities such as Genoa. Girls "in transit", indeed, It was a time priority. The shelters are now all over Italy the heart of the Association button and want to be a space and a family time for those who have no family or if they are far away for so many different reasons. After the renovation of the House of Young, ACISJF resumed its service to young women, adapting it to the needs of today.

07 Oct 2021
As #coops4dev🌍 comes to a closure, a new chapter begins for cooperatives in international development

The first stage of the ICA-EU Partnership on…

“This distinction comes with responsibility for us,…

With the pandemic making businesses across the world…