The International Cooperative Alliance and the European Research Institute on Cooperative and Social Enterprises (Euricse) launched the 2020 World Cooperative Monitor during a special webinar on 20 January.

The annual report is produced by the ICA with the scientific and technical support of Euricse and can be consulted here. The data collected for the 2020 edition is from 2018, with primary sources including annual and sustainability reports, economic databases, data collected by national associations, research institutes and other organisations, alongside responses to a questionnaire sent directly to enterprises.

In its ninth edition, this report presents rankings based on turnover as well as the ratio of turnover over gross domestic product (GDP) per capita. In addition to a ranking of the Top 300 cooperatives and sector rankings, this year’s monitor includes an analysis of cooperative responses to two global challenges: Covid-19 and climate change.

Introducing the report, Pete Westall, chief values officer at the Midcounties Co-operative in the UK, highlighted that cooperatives across the world had led the way in providing economic and social support during the pandemic. “The solutions so many have turned to have been in line with values of social responsibility and care, values that we all share,” he said.

ICA Director General Bruno Roelants said that cooperative responses to climate change and Covid-19 will be discussed at the ICA’s World Cooperative Congress as part of the Congress’ theme - “Deepening our cooperative identity”.

Gianluca Salvatori, Euricse Secretary General, said the Monitor had been developed as part of a collaborative process engaging practitioners and apex bodies.

Presenting some of the findings, Euricse researcher Chiara Carini launched a call for data for the 2021 edition of the Monitor. Euricse is keen to hear from cooperative federations in Africa where it wishes to increase coverage and data collection. 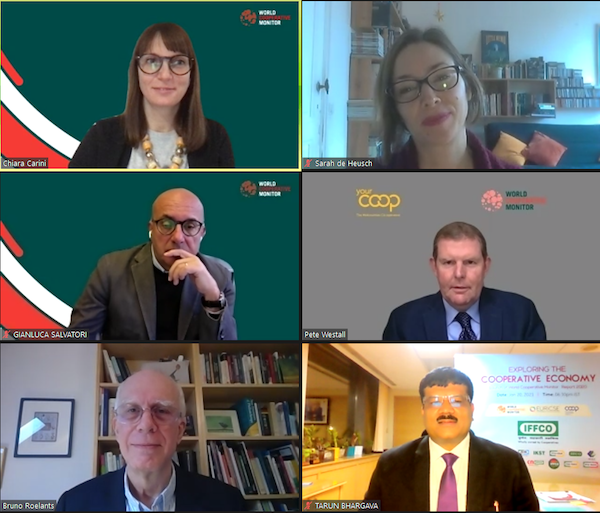 The second part of the webinar featured a round table with experts and cooperators involved in the Monitor. Tarun Bhargava, Deputy General Manager at the Indian Farmers Fertilisers Cooperative, mentioned the role of the International Cooperative Entrepreneurship Think Tank (ICETT) in providing case studies for qualitative data.

Sara de Heusch from the freelancers’ cooperative Smart in Belgium, who is a member of ICETT, said it was important to gather  data to make the case for cooperatives and cooperative-friendly policies. She praised the team behind the Monitor for collaborating with cooperatives to share experience and gather data.

“The Monitor is a good instrument of co-construction, a real collaboration between different cooperatives and cooperative groups,” added Bruno Roelants. He explained that these collaborative efforts had helped to spread the cooperative model.

Gianluca Salvatori invited apex bodies to create their own reports at national level while acting within networks to exchange information and compare trends. “The lesson we can draw from the monitor’s experience is that we need to learn from each other,” he said.

In terms of the role of cooperatives in rebuilding the economy after the crisis, the panellists agreed that the sector could lead the way towards the recovery. Mr Roelants said that the ICA’s members had shown resilience and proactively met people’s needs.

Ms de Heusch explained how cooperatives like Smart had used reserves to cope with the crisis. “It wasn’t easy but the values and reserves enabled them to put in place solidarity measures to support members,” she said, adding that the pandemic had increased inequalities between workers with those on short-term contracts not taken into consideration by some governments.

“Cooperative values are needed now more than ever. Things need to be rethought based on social security,” she said, adding that small cooperatives could achieve more under a bigger banner such as ICETT. Mr Salvatori agreed that the cooperative model was particularly suitable for vulnerable times. “The COVID-19 pandemic cast a new light on the social role of social economy enterprises and cooperatives. In the post pandemic its role could increase even more,” he said.

Mr Bhargava believes the crisis could continue. “At this moment we must rise together, adopt scientific innovations and make cooperatives stronger,” he said, highlighting IFFCO’s response to the pandemic, which included providing PPE and hand sanitisers to local communities. “We will have to continue this for a few years until the economy is back,” he concluded.

2021 is here and the pandemic continues. This virus has…

The COVID-19 crisis has led to economic hardship…